The WorldPride 2025 Taiwan Preparation Committee has refused to host the global LGBTQ+ event as the global organiser InterPride insisted on changing the title of the event from "WorldPride Taiwan 2025" to "WorldPride Kaohsiung 2025". In an open statement published on Facebook on August 12, 2022, the Taiwan preparation committee stressed:

The final straw that led the negotiation to a deadlock was the abrupt notice from InterPride, requiring the name of the event to change from "WorldPride Taiwan 2025" to "WorldPride Kaohsiung 2025". This is despite the fact that the name "WorldPride Taiwan 2025" was used throughout the entire bidding process: From the bid application and the bid proposal evaluation to the voting process and the winner announcement back in 2021.

WorldPride is an international event that promotes LGBTQ+ issues through parades, festivals, and other cultural activities. The event is licensed by InterPride, which is a network of LGBTQ+ organisations from across the world. Usually, the name of the host city would be placed in the event title.

InterPride responded on Twitter that it was "surprised" by the decision and that there is a "long-standing tradition" of using the host city’s name for its WorldPride event.

However, the situation in Taiwan is a bit trickier than normal — it is neither a city nor a member of the United Nations.

The Republic of China (ROC), under the then ruling party Kuomintang, was a member of the United Nations between 1945-1971. Its membership was replaced by the People's Republic of China (PRC), under the Communist Party of China, as the exiled Kuomintang lost the Chinese Civil War in 1949, along with the sovereignty of the Chinese continent. The PRC insists on the One China Principle, and hence Taiwan is not recognised as a sovereign state in the international diplomatic world.

In fact, according to statements from both Taiwan’s preparation committee and Taiwan’s Ministry of Foreign Affairs (MoFA), after controversy over referring to Taiwan as a region in the WorldPride 2025 bidding result announcement, InterPride agreed to use "Taiwan" in the event name in a tripartite meeting.

As shown on the online poster about the WorldPride 2025 bidding result, published by InterPride on November 16, 2021, "Taiwan" is used in the event title: 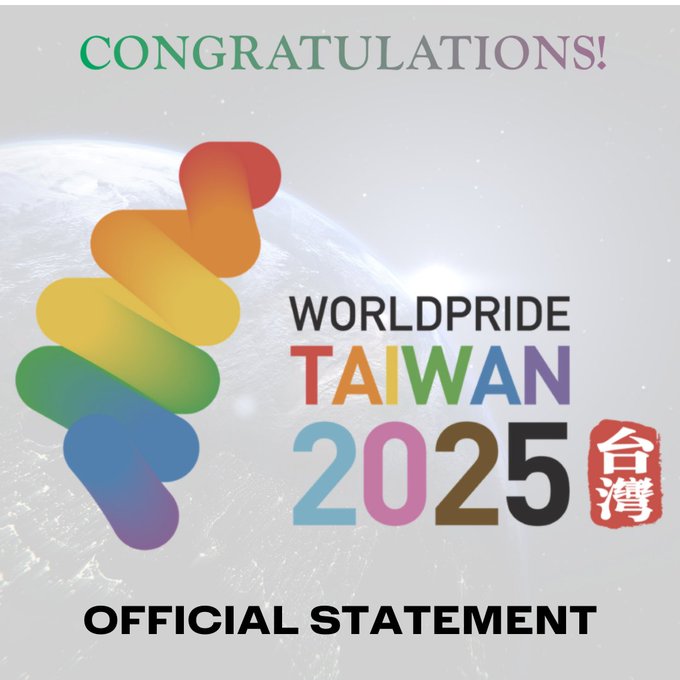 To prepare for the international event, the winner of the bid, Kaohsiung Pride, joined hands with Taiwan Pride to form the WorldPride 2025 Taiwan preparation committee. The committee explains why it insisted on using "Taiwan" instead of "Kaohsiung" in the event title:

First, the name "Taiwan Pride" is of symbolic significance to the Taiwanese LGBTIQ+ community as it has been used for Taiwan’s first and still ongoing Pride parade since the first edition in 2003. It was not named after the city but the nation as a whole. Second, WorldPride Taiwan 2025 was planned to connect several Pride events and activities across Taiwan, with many cities, in addition to Kaohsiung, participating.

Taiwan became the first jurisdiction in Asia to legalise same-sex marriage in 2019, and it annually hosted the largest Pride Parade in Asia.

In a statement, Taiwan’s MoFA slammed InterPride’s abrupt notice on the name change:

Not only does the decision disrespect Taiwan’s rights and diligent efforts, but it also harms Asia’s vast LGBTIQ+ community and runs counter to the progressive principles espoused by InterPride.

Serbia's reason was different from that of Taiwan

On 15 August, two days before the development in Taiwan, the Serbian authorities received an official request from a civil society group to cancel the ‘EuroPride’ LGBT event scheduled for mid-September, on security grounds. The petition came a day after tens of thousands of people marched through Belgrade carrying Orthodox Christian symbols and signs, such as ones saying "Hands off our children."

The march was reportedly blessed by a bishop, Nikanor of Banat, who was recorded last week as saying he would cast a curse on anyone involved in the pride event.

According to the NGO Upright Serbia, which filed the petition, the pride parade scheduled for 17 September endangers public morality and elevates the risk of violence, property destruction, and large-scale disorder. The Belgrade authorities have not yet commented on the request.

EuroPride 2022 is scheduled to run during 12-18 September and is expected to attract tens of thousands of LGBT activists from all over Europe, ending with a walk from the Serbian parliament to the Kalemegdan fortress overlooking the Danube.

On 14 August, however, tens of thousands of Belgrade residents marched the opposite way, in an orthodox procession intended to show their opposition to the event. Chanting "Hands off our children!" and "No to occupation," the marchers sang Orthodox hymns and patriotic songs while carrying crosses, icons, and flags.

Organisers estimated anywhere from 20-30,000 people took part, while early police estimates and media reports spoke of under 5,000. President Aleksandar Vucic referred to that estimate on 15 August, bringing up the march at a press conference without being asked about it.

"Last night we had a much bigger protest against EuroPride, some 4,650 people, more than the biggest opposition rallies ever," he said. It was a different tone from the one he used last Friday when he dismissed criticism of the EuroPride by saying those who object to "someone walking around" should "take the day to have a picnic" on nearby Mt. Avala.

In the same TV interview, Vucic criticised Bishop Nikanor of Banat for his remarks about acting Prime Minister Ana Brnabic, who is a lesbian. Vucic said Nikanor offended Serbia and humiliated the church "far more than Brnabic or anyone else ever did."

Bishop Nikanor reportedly gave the blessing to his clergy to participate in the Belgrade protest on 14 August. Speaking after a church service last week, he condemned the EuroPride as blasphemy and desecration of Serbia, saying he would take up arms against it were he not a cleric.

"They come to desecrate our capital, nothing is holy to them," the bishop said. "We will all rise against it, starting with me," he added. "I will cast an anathema on everyone who takes part or organises such a thing. That’s all I can do. If I had weapons, I’d use them, but I don’t."

The 14 August march was denounced by opposition activist Dragan Sutanovac, former leader of the Democratic Party and one-time defence minister who now advocates NATO membership for Serbia. He called it a march "against Serbia in the European Union, against sanctioning Russia, against Western values, so Serbia could become 'Chechen-ised' and 'Taliban-ised'," among other things.

Meanwhile, the NGO ‘Lesbian and Gay Solidarity Network’ urged the government on 15 August to urgently purchase vaccines for monkeypox and hand them out for free to high-risk groups such as gay men, who account for all of the cases recorded in Serbia so far.

Epidemiologist Zoran Radovanovic also urged vaccinating all members of the LGBT population. The doctor, who has advocated strict Covid-19 mandates, told the Beta news agency that the upcoming EuroPride could be an "epidemiological bomb," but did not urge its cancellation, advising those in attendance to "avoid intimate contacts with non-permanent partners" instead.

As court pushes cut-off period for abortion, a look at possible complications arising out of late MTP

Why Umar Khalid, Khalid Saifi can’t be said to be innocent despite release in a Delhi riots case

Since the Black anti-racism activist publicised the case on social media, Ngozi Fulani claims to have been under 'tremendous pressure' to withdraw her complaint
Health

As court pushes cut-off period for abortion, a look at possible complications arising out of late MTP

While there are social concerns of activists, as well as religious beliefs on the issue, Sirf News strictly studies medical implications of the court verdict
Crime

Why Umar Khalid, Khalid Saifi can’t be said to be innocent despite release in a Delhi riots case

Why Trump wants US constitution scrapped