[dropcap]I[/dropcap]t was on a Karitika Purnima on 15th April 1469 in Nankana Sahib near Lahore in Pakistan, that Sri Guru Nanak Dev, first among the ten legendary Sikh Gurus was born. Since then every Kartika Purnima is celebrated as the birthday of Guru Nanak and known in the Sikh community as Guru Parab.

Born to Mehta Kalu and Mata Tripta, Guru Nanak, it is said, displayed interest in things of a Divine nature even as a five year old child. He shifted to Sultanpur staying with his elder sister Bebe Nanaki and her husband. There are many spiritual stories associated with his childhood that come to us from the traditional sources of Sikhism. Notably lore recounts that he astonished his teacher when he pointed out the first letter of the alphabet resembling the mathematical version of 1, to him, symbolizes the monotheism of God. The earliest biographical sources is considered to be the The earliest biographical sources on Nanak’s life recognised today are the Janamsākhīs (life accounts).

Rai Bular and his sister Bebe Nanaki were the first to recognize the prodigious spiritual potential of the child. Tradition states that at the age of 30 he had a vision after which he vanished for three days. People around thought he had drowned in the nearby river, but after the third day a changed Nanak came back, resplendent with a silence force, and proclaimed that he had an encounter with the Divine where he was given a cup filled with nectar. Nanak was told: 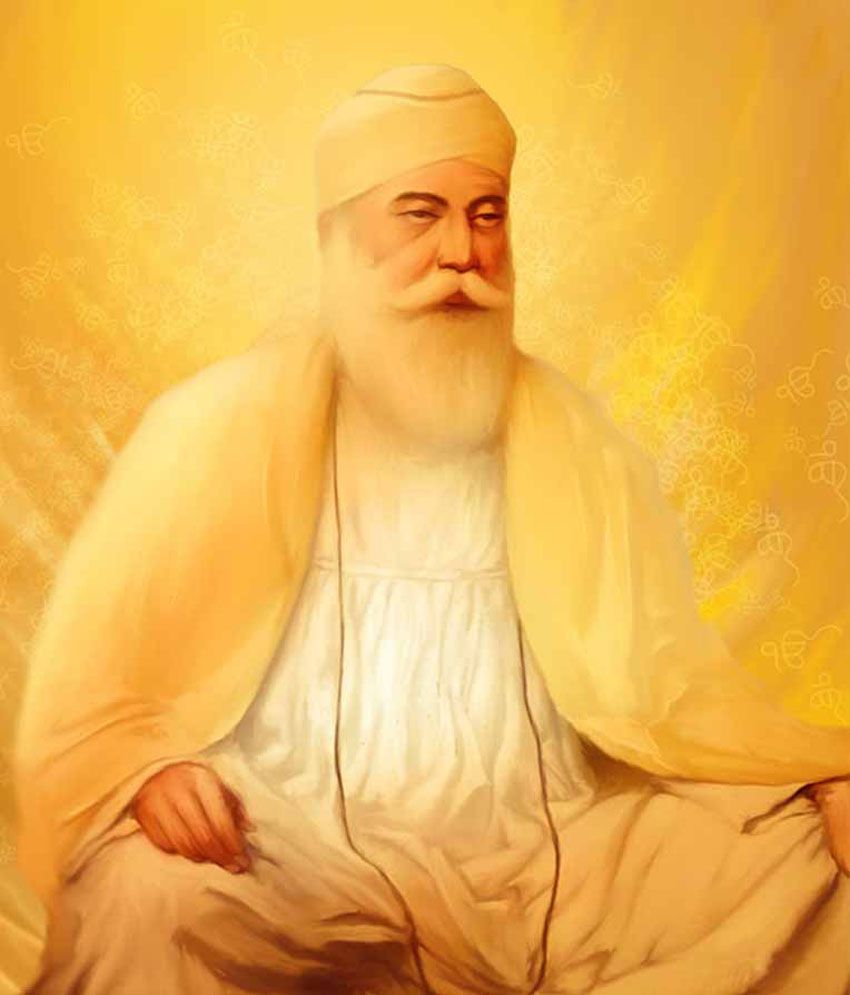 “This is the cup of the adoration of God’s name. Drink it. I am with you. I bless you and raise you up. Whoever remembers you will enjoy my favour. Go, rejoice of my name and teach others to do so. I have bestowed the gift of my name upon you. Let this be your calling.”

Tradition believes this was when Sikhism came into existence.

As in all religious studies there are two different views among scholars where one set believe that Sikhism was not an attempt to bridge the gap between Hinduism and Islam but a whole new inspiration from the Divine itself, while another view believes Guru Nanak’s primary aim was to bring about  a spiritual cohesion between the two divergent religions of Hinduism and Islam, which were often in conflict. The primary thrust of his teachings was the monotheism of God and the primacy of bhakti or devotion in ones spiritual growth along with service to others. Guru Nanak is said to have contributed 974 hymns in the Guru Granth Sahib.

Nanak traveled extensively during his lifetime with some accounts stating that he went to Tibet, as well as Mecca and Baghdad where he is supposed to have engaged in debates and discussions with religious preachers. In Baghdad there is said to be a stone inscription in Turkish script which speaks of a Baba Nanak Fakir who stayed there for 1 year, or 11 years, depending on the interpretation of the line. This inscription forms the basis of many scholars claiming that he visited the religious places of the Middle East, while an opposing group of scholars claim that this inscription is of 19th century. There are also accounts of his interaction and philosophical discussions with Siddha yogis like Gorakshanatha, Charpatnath etc. He died on 22 September 1539 in Kartarpur, at the age of 70, after appointing Guru Angad as his successor.

Guru Parab celebrating the birth of Guru Nanak, is arguably the most important religious festival in Sikhism.

There is but One God. His name is Truth; He is the Creator. He fears none; he is without hate. He never dies; He is beyond the cycle of births and death. He is self-illuminated. He is realized by the kindness of the True Guru. He was True in the beginning; He was True when the ages commenced and has ever been True. He is also True now.

There are worlds and more worlds below them, and there are a hundred thousand skies over them. No one has been able to find the limits and boundaries of God. If there be any account of God, then alone the mortal can write the same; but God’s account does not finish, and the mortal himself dies while still writing.

After Pathirana of Sri Lanka delivered the ball to Yashasvi Jaiswal in the Under-19 World Cup match, the television screen showed this speed
Read more
India

For an answer, the reader will have to go through a history of cases similar to the Sabarimala dispute heard in the Supreme Court
Read more

After hate criminal Imran Chishti's video showing him appraching the gurdwara went viral, he made another video, apologising for the incident
Read more
World

Sikh murdered in Pakistan came from Malaysia for marriage

Ravinder was the brother of journalist Harmeet Singh, Pakistan’s first Sikh journalist on TV, who had gone to Peshawar to shop for his wedding
Read more
India

Gurdwara discards 30 kg of cooked dal, realising it was ‘plastic’

We dare govt to publish names of big loan defaulters