[dropcap]T[/dropcap]he annual Chhath puja dedicated to the veneration of the sun god and his wife, Chhathi Maiya, started on the 4 November this year and will go on till the 8th. Sun-worship has been a part of most pagan and ancient cultures because the sun is probably the most visible form of divinity.

Surya was clearly one of the prominent deities of the RigVeda, adored for dispelling darkness and, to use a vedantic interpretation, for expanding the human mind beyond the limitations of the self and environment. One way of looking at the Vedic pantheon was that there were 3 major classes of deities: Vasus, Rudras and Adityas. The 12 Adityas became popular representations of solar deities in India. But probably the most common link that we have to those times, which bear testimony to the influence of the Surya worshipers, is through the medium of the Sāvitrī Gayatri mantra, which is, in a way, linked to the sun. Apart from this we also have the ubiquitous-in-application Aditya Hridayam Stotra which was told to Lord Rama by Rishi Agasthya before his decisive battle with Ravana.

Before the Smarta tradition of Adi Shankara considered Surya one of the 5 cardinal deities who could lead one to liberation during the medieval times, there was already a strong and powerful cult of Sauryas — those who worship Surya — particularly in Rajasthan, Gujarat, Madhya Pradesh, Bihar, Jharkhand and Odisha. Surya’s iconography often depicted him as riding a chariot driven by 7 horses, where the horses represented the 7 meters of Sanskrit prosody: Gayatri, Brihati, Ushnih, Jagati, Trishtubha, Anushtubha and Pankti. 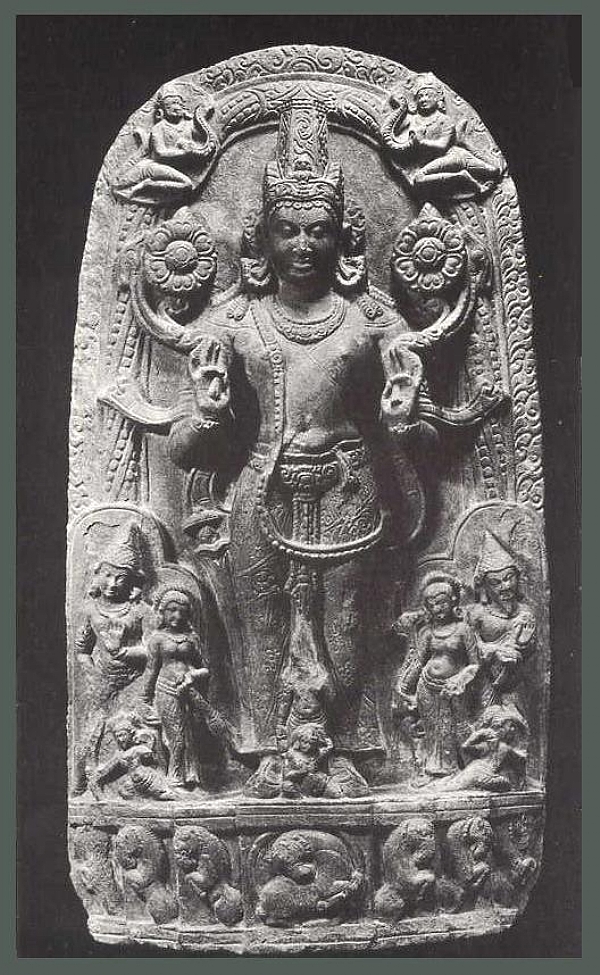 Surya had 2 or 4 hands, holding lotuses, and staff and palm leaf. His chariot was drawn by Aruna while he was flanked by the goddesses Usha and Pratyusha. The addition of 2 more hands to the figure of Surya probably indicates a growing acceptance of Surya’s influence as a granter of scholarship and knowledge, apart from spirituality. Some old temples of Surya also had the horse-riding Revanta, sun of Surya, included in the pantheon, until the worship of Revanta nearly vanished from India.

During the period of the Mahabharata we have evidence of Karna who was a Sun worshiper. We also find the story of Draupadi worshiping Lord Surya on the advice of Rishi Dhaumya. This incident is taken as a precursor to the modern day ritual of Chhath Puja.

Celebrated on Kartika Shukla Shashthi of the Vikram Samvat calendar, the word Chhath refers to the sixth tithi. A combination of day-long fasts, and offering of arghya to both the rising and setting sun, is typical during this festival. Metaphysically and astrologically the Sun not only represents the atma, but also fame, reputation, authority and protection against various diseases. That is why of all grahas, the cult of Surya reached maximum prominence in ancient India.

According to Brahmavaivarta Purana, Chhaya’s son Shani had complained to her stepmother Shashthi that his father Surya had abandoned her mother. There was such bonhomie between the 2 women that Shashthi decided to abandon the sun god as a retaliatory measure. Then the 2 estranged wives of the sun god entered deep penance to please Brahma.

On learning of their plight, Brahma summoned Surya. Terrified of the consequence of inviting Brahma’s ire, Surya embraced both his wives. Further, he blessed them that worshipping them would be akin to worshipping him. Chhath Puja is the worship of the sun god via offerings to his wives Shashthi and Chhaya.

How Chhath is observed

In the 4-day long worship, the devotees first clean their houses and the surroundings, bathe and then take pure vegetarian food on the first day. This time it was 4 November. For cleanliness, not a broom but a clean piece of cloth is used, signifying special care for sanitation.

Under kharna, the devotee fasts for the whole day. The nirjala vrata involves fasting without the intake of even a drop of water on 2 days. In the evening, the family takes some prasad made of sugarcane juice or gud (jaggery). The prasad is a Hindu sacrament. Unlike its Christian counterpart that comprises bread and wine, prasad consists of fruits and homemade sweets that have already been offered to the god of the occasion.

On the third day, the devotee fasts once again, intaking no food after rising early in the morning. The fast won’t break in the evening when the setting sun is worshipped. This year, it is happening on a Sunday on the day of nakshatra (lunar mansion) Uttara Ashadha.

A basket of bamboo and cane is bought from the market. All ingredients of the ritual are kept ready. A small arena is created using sugracane sticks and a big earthen pot, an oil lamp and an elephant idol are kept beneath it. All the things necessary for the puja are then placed in the pot.

One is beholden to the sight of queues of women heading to the nearest river this day, singing paeans to Chhathi Maiya, accompanied by men carrying offerings in cane baskets held on their heads, covered generally with a sheet that is yellow, considered among the most auspicious of colours, signifying knowledge and evoking peace, meditation, happiness, competence and mental development. This basket contains a coconut wrapped in a red cloth, 5 different fruits and other tools of worship. At the river, they make the Chhath Mata ka Chaura, a small, makeshift area for worship where all ingredients for the puja are kept. The goddess is offered the coconut. The devotee then goes knee-deep into the water, stands to worship Surya, does a parikrama (going around in circles) and offers milk and water to the god.

The prayers continue till late in the night even after the believers return from the ghats. Cities and towns through which no river passes make do with lakes or any prominent water body in the region. The prayers may also be accompanied by narrations of lores associated with Chhathi Maiya.

Worshipping the setting sun has a symbolic value. It is to philosophise that one must be as respectful of anybody and anything that is past its prime, about to retire as one is to things that have a promising future.

This Monday falls on the Shravana nakshatra along the ecliptic. On this fourth and final day, people reach the ghats before sunrise, carrying along the things used for puja the previous day. They pay obeisance to the rising sun and pray to the Shashthi mother for the well-being of children. Prasad is once again distributed to all. It is only after everybody returns from the river banks that those who were fasting break their fasts.

Rajarshi Nandy
He is a practising spiritualist, eternal pilgrim and, by profession, a technical writer. He does not belong or subscribe to a particular sect of Hinduism; he is open to the idea of exploring all of them. He volunteered to be our news editor; this is an honorary posting. He not only decides on the right reports from agencies but also contributes to the presentation of news items.
Share
Facebook
Twitter
Pinterest
WhatsApp
Linkedin
ReddIt

What excuse is there for a shoddy investigation into Raja Rammohun Roy by Rajiv Malhotra and his glossing over the side-lining of Sanskrit by the heroes of Hindutva?
Read more
Dharma

Jagannatha is the Lord of the Kali Yuga, the form Lord Visnu takes to govern the last of the four yugas in popular conception....
Read more
Dharma

Ekajaṭī or Ekajata (Sanskrit: “one plait woman”; one who has one knot of hair), also known as Māhacīnatārā, originated in Tibet and later found...
Read more
Previous articleAdministrations across India struggle to prepare for Chhath
Next articleOppn, section of media slam govt for NDTV ban

Soros Loves To Play Messiah To The Miserable

The opportunity to throw breadcrumbs massages the ego of NGOs supremacists run; the megalomaniac Soros is a personification of that ego
Read more

But Bandhu Tirkey and Pradeep Yadav, whom Babulal Marandi expelled from the JVM, face legal challenges in joining the INC
Read more
India

Pathalgadi supporters asked villagers in Burugulikera to submit their identity proofs, then abducted James Budh and six others who protested
Read more
Crime

Lohani, who joined Air India to steer it from crisis, to...

Jaiswal becoming next CP of Delhi would upset UT-cadre IPS

BJP lashes out at Congress after fresh ‘expose’ on Analytica

400 MLAs vote in UP Rajya Sabha polls; close contest for...

Soren gets support of too many MLAs to depend on INC